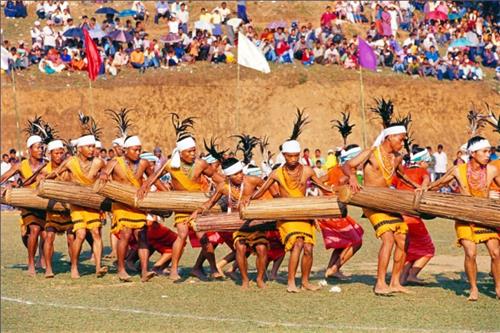 Wangala Festival is the annual harvest festival held in the state of Meghalaya. The festival is celebrated in honor of Saljong, the Sun-god of fertility. The festival signifies the onset of winter as well as it marks the end of a period of toil, which brings good output of the fields. Wangala Festival is also known as “100 Drum Festival”, which mainly includes tribal groups offering sacrifices to please their main deity Saljong - the Sun God.

The festival extends from two days to a week, with the first day focusing on the ceremony of "Ragula". On the second day the ceremony of “Kakkat” is performed. People of all age groups young and old dress in colorful attractive costumes with feathered head gears dance to the tune of music played on long oval-shaped drums.

The festival brings relaxation for the people of Meghalaya. The sound of drums played during this festival echoes in the hills for a long period to come. Although the dances performed every time have some variations, yet the main idea remains a queue of two parallel lines - one of men and other of women clad in their festive fineries. Participants move in lines while playing drums in a rhythmic manner. 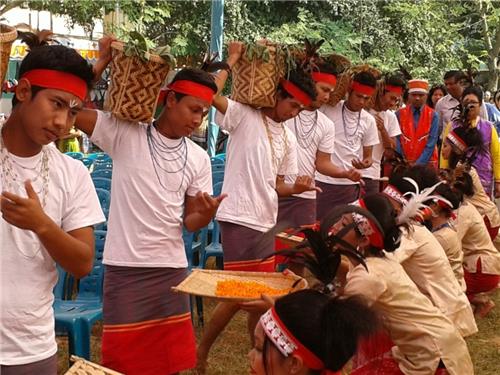 The main attraction of the festival is the music and orchestra being played by men in a rhythmic fashion. The orchestra of men includes drums, gong and flutes, punctuated by the sonorous music of a primitive flute made of buffalo horn. There is a notable sense of tempo in the performers, young and old, and the energetic dance leaves a lasting impression upon the beholder.

The festival is held every year at Asanang village near Tura. It is also known as Dobakhol and is also known as the Cave of the Bats. One interesting thing about these caves is the deposit of stalagmite found here till date. The caves, their location, the weather, serene natural beauty, cloudy sky all mesmerize the tourists coming here and especially during the Wangala Festival as the atmosphere is studded with rhythmic music of drums.

Meghalaya, which means land of clouds, is mainly an agricultural and farming land. The inhabitants here therefore generally worship the Lord of farming and agriculture. The Wangala Festival is therefore a grand carnival to celebrate the harvest season. This is because after year long toil the inhabitants find relief in seeing the golden harvest. So, they pay homage to the lord who has blessed them with such a splendid crop and sing and dance to offer worship to the great deity. The inhabitants of Garo hills also make numerous offerings and sacrifices to the Lord for his support and blessings. In all the festival elaborates on the culture and traditions of the inhabitants of Garo Hills.

Apart from celebrating the golden harvest the festival also signifies the onset of winters. Thus, the festival is certainly celebrated in winters, generally in the month of November.