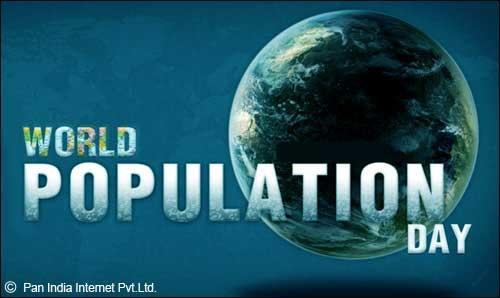 Today, population explosion is one of the major concerns of the world. As this issue of uncontrolled population growth is giving birth to other major problems in the world. Few of the major consequences of the rapid growth of population in the current time are Poverty, Unemployment, Pollution, Deforestation etc. There is severe need to check this explosion and observance of World Population Day is just a step in this direction.

July 11 is observed as World Population Day all over the world for the promotion of crucial issues such as the importance of family planning, including gender equality, poverty, maternal health and human rights. The observance of this day is a ray of light towards the growth and development in the current time of ever growing population. The day has been celebrated every year since 1989, year of its announcement.

World population Day was instituted by the Governing Council of the United Nations Development Program in 1989. The date of observance of World Population Day was inspired by the date of Five Billion Day. As, the world’s population reached five billion people on Five Billion Day, July 11, 1987. This concern of rapid growth of population resulted into the establishment of World population Day on the same date. Since then, with the United Nations Population Fund s (UNFPA) encouragement, governments, non-governmental organizations, institutions and individuals organize various educational activities to celebrate the annual event.

Every year the celebrations of World Population Day are based on the particular theme, decided by the United Nations. The day is celebrated worldwide by business groups, community organizations and individuals in various ways. Different events like seminar discussions, educational information sessions etc are conducted to mark the day’s celebration.

The year 2022 will mark the 32th anniversary of the World Population Day.

#1 Thomas Clark 2018-07-05 09:34
Exploding population year by year has to be checked on the large scale and that is why United Nation Assembly collectively took the step forward on July 11, 1989 to celebrate World Population Day.