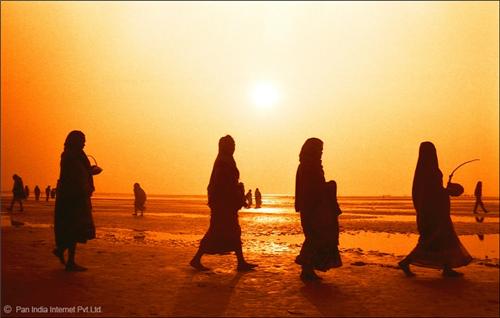 Bathing rituals are important in all religions but they have special role in Hinduism where besides personal cleansing they are also associated with cleansing the soul of sins committed. Maha Kumbh held once every twelfth year and Kumbh Mela held every four years at alternate locations of India are biggest congregations of mankind. Next position with a million people attending it goes to Ganga Sagar Snan. It is held annually at Sagar Island in South 24 Pargana District of West Bengal and, 140 km from Kolkata. In 2023 it will be held on January 14 (Saturday).


Ganga Sagar Snan also known as Ganga Sagar Mela is the largest fair celebrated in the state of West Bengal on the occasion of Makar Sankranti. A dip in the ocean, where the Ganga drains into the sea is considered to be of great religious significance particularly on the Makara Sankranti day when the sun makes a transition to Capricorn from Sagittarius and this town becomes home to vast fairs, drawing visitors and recluses from all over the state.

The fair is celebrated at Sagar island where the holy river Ganga drains into the Bay of Bengal. Sagara means the ocean, and the island is located where the river Ganga enters the ocean. A well-attended fair is held and people come from long distances to bathe here. After the bath Ganga Ma or the Goddess Ganga is worshipped. It is believed that Ganga entered the ocean at this point to wash the bones of the 60,000 sons of Sagara, in whose memory the island is held sacred. They were reportedly killed by a curse from sage Kapila. Thousands of devotees from all corners of India gather here to take a holy dip on this day. There is a common belief among the locals that the girls who take the holy dip get handsome grooms and the boys get beautiful brides. When they are done with the ritual obligations, they head towards the Kapilmuni Temple situated nearby, to worship the deity as a mark of respect.

Ganga Sagar Snan Mela- the fair associated with snan, lasts for a week but proper Snan (Bath) and it’s religious ceremonies start from a day prior to Makar Sankranti and end the day after. On Makar Sankranti day, devotees keep fast and worship Kapil Muni at his temple at 3 AM in morning with Maha Puja and Yagna and then bathe in the cold water of holy Ganges River to wash away their sins.

Hindus from all over India and abroad come to perform Ganga Sagar Snan. But it is more frequented by people from West Bengal, Bihar, east Uttar Pradesh, Jharkhand and Odisha due to their proximity to the place.

How to Reach Sagar

To reach Sagar Island you have to first go from Kolkata to Kakdwip 135 km away by bus or taxi. There you have to shift to a ferry to cross the river and after 40 minutes reach Sagar Island .The Island is 300 square km in area and has 43 villages with population of two lakhs. Kapil Muni’s temple is located at it’s southern tip. There are several small hotels, youth hostels, and ashrams of charitable organizations which provide simple lodging and boarding.

West Bengal government organizes the Snan under Ganga Sagar Mela Act 1976. Work is on for providing additional facilities for pilgrims at Sagar Island. Amitav Ghosh has described the festival and the island in Sundarban mangrove forests beautifully in his book ‘The Hungry Tide’. A deep sea port and a naval base are completed here on 2021.