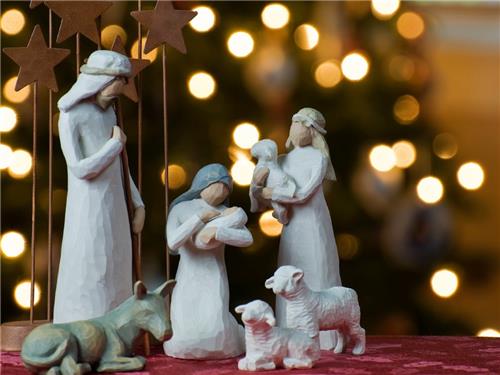 Christmas has had a long and varied history. It has been celebrated for centuries by different people, at different times, in different places, and in many different ways. The early Christians who were the hunted feet in the Roman Empire could not celebrate the birth of Jesus and under compulsion had to practice their religion in secret because Christianity in Rome had grown up in blood and tears.

To publicly profess their religion meant grave risks to life and many a time resulted in death punishments. As such events connected with the life of Christ were commemorated by fasts, prayers and rites but not by public celebrations. But after the conversion of Emperor Constantine to the Christian religion in 4th century A.D. that creed, professed by a few secret groups of enthusiastic believers was transformed into the religion of vast masses of humanity in Europe, Western Asia and North Africa.

With this creed thus firmly established, the need for a popular festival to annually celebrate the birth of Christ was felt. But different groups had been celebrating Jesus birth on different dates like 6th January, 19th April, 20th May, 17th November and 25th December.

By the 5th century A.D. 25th December got accepted as the most suitable date in the Western World and gradually the Eastern Churches fell in line with the west and did away with non-Christian religious rites and old traditions and introduced Christian rites and legends.

In India all the Christians did not recognize this date. The Syrian Christians who belong to Kerala did not celebrate Christmas on 25th December. Those who belong to Kerala celebrated it on 7th January with procession of elephants and musicians. Those processions were almost like Hindu Temple festivals. It was believed that those processions spiritually elevated the places through which they passed and also prevented epidemics. The music, fireworks and illuminations turned cold, dark winter nights into bright, dazzling days.

Gaily decorated crosses of gold or silver were the main sacred symbols that were taken out in processions but with arrival of the Portuguese on the scene, images of saints were added to the procession. Those age-old pageants are now being replaced in Syrian churches by community prayers and services, aiming at spiritual uplift of the congregation.

Yet most of the Syrian Catholic Churches even today take out small processions.

The Portuguese who established their supremacy in the coastal regions of India during 16th century A.D. were ardent supporters of Christianity. So the Christian religion spread widely in their dominion. Christians observe certain days like the Palm Sunday, Good Friday and Easter to commemorate certain events in the last 8 days of Christ s life- Crucifixion and his Resurrection.

From Goa, the capital of the Eastern Empire of the Portuguese, missions were sent to several places in the country even to the Moghul court, but those missions did not achieve any spectacular success. It was only during the British period that the Christian religion spread all over the country.

The festival of Christmas is celebrated for ten continuous days. The end of these Christian festivities is the New Year day. The British introduced the Gregorian calendar and throughout their rule it was the only calendar in use for official purposes. Even after they left and India became independent that calendar is being followed in India for official purposes. The first day of January is the New Year day of the Gregorian calendar.